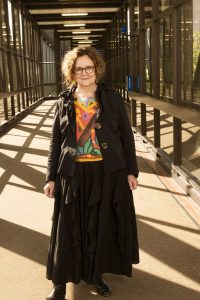 Kathleen Ann Goonan has been at the vanguard of literary science fiction since the publication of her New York Times Notable Book QUEEN CITY JAZZ in 1994, garnering starred reviews in all major review journals, such as PW, Kirkus, and Booklist, for each of her six novels. A literary stylist, she melds cutting-edge science with strong characterization, history, jazz, and what PW described as ” . . . the work of a powerful imagination with a superior command of language.” Her work has been the subject of articles as widely varied as Scientific American’s “Shamans of the Small” in their special Nanotechnology issue and scholarly papers in literary journals, and has been studied at UCR, MIT, RIT, and other universities. Goonan has been invited to speak at international literary festivals, such as Kosmopolis in Barcelona and Utopioles in Nantes, government think tanks, and in university settings. Her novels have been finalists for the Arthur C. Clarke Award, BSFA, and Nebula Awards. IN WAR TIMES won the Campbell Award for Best Science Fiction Novel of 2007 and was also the American Library Association’s choice of Best Science Fiction Novel of the year.